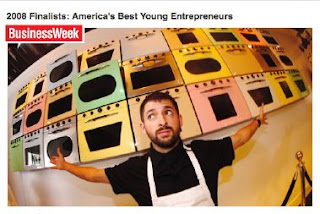 Johnny Cupcakes has been nominated for a Best Young Entrepreneur Award from BusinessWeek Magazine! Per an email from Johnny Cupcakes, purveyor of awesome baking-themed clothing:

"In 2001, Earle dropped out of music college after just two weeks. On a lark, he made a T-shirt with an image of a cupcake atop a pair of cross bones. The trenchantly iconic design got noticed and people started asking to buy his tees. Earle began selling them out of the trunk of his '89 Camry and later at what he calls his "cupperware parties" and trade shows. "Guys think it's funny and girls think it's cute," he says.

Today Earle has two Boston-area retail stores, and recently opened a third on Melrose Avenue in Los Angeles. His limited-edition shirts and accessories are also sold in select stores in Paris, The Netherlands, Canada, and Scotland.

Earle, who hired his mother as his accountant, insists on using only high quality shirts manufactured in the U.S. and refuses to advertise or sell in chain stores, preferring to focus on his own stores. "I always turn down offers from investors and retail stores; some people say I'm crazy." His shops look like Willy Wonka-inspired bakeries, with vintage ovens serving as shelves that shoot fake steam. Instead of bags, purchases are put into bakery-style boxes. Earle says 600 people lined up for his Melrose store opening and he sold $29,000 in goods that day. Last year's sales hit $2.29 million and Earle—who says the business became profitable in 2006—expects revenue to jump to $3.75 million this year."

The Fluff Festival is Almost Here (9/24) 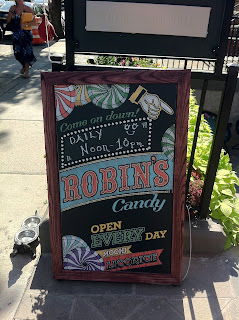